Bar, Montenegro: where the sunset warms your dreams

There are places which you don’t hear a lot about.
Places about which you have few informations, sometimes incomplete, and also fewer images. So, when you decide to go there, you never know what to expect, you can feel that sense of anticipation, usual for travels, but also of agitation: “What if there is nothing to see and do? What will I do?”
Sometimes you are unlucky, while other times you discover that it was really worth it.
For Bar, to us, it was worth it. 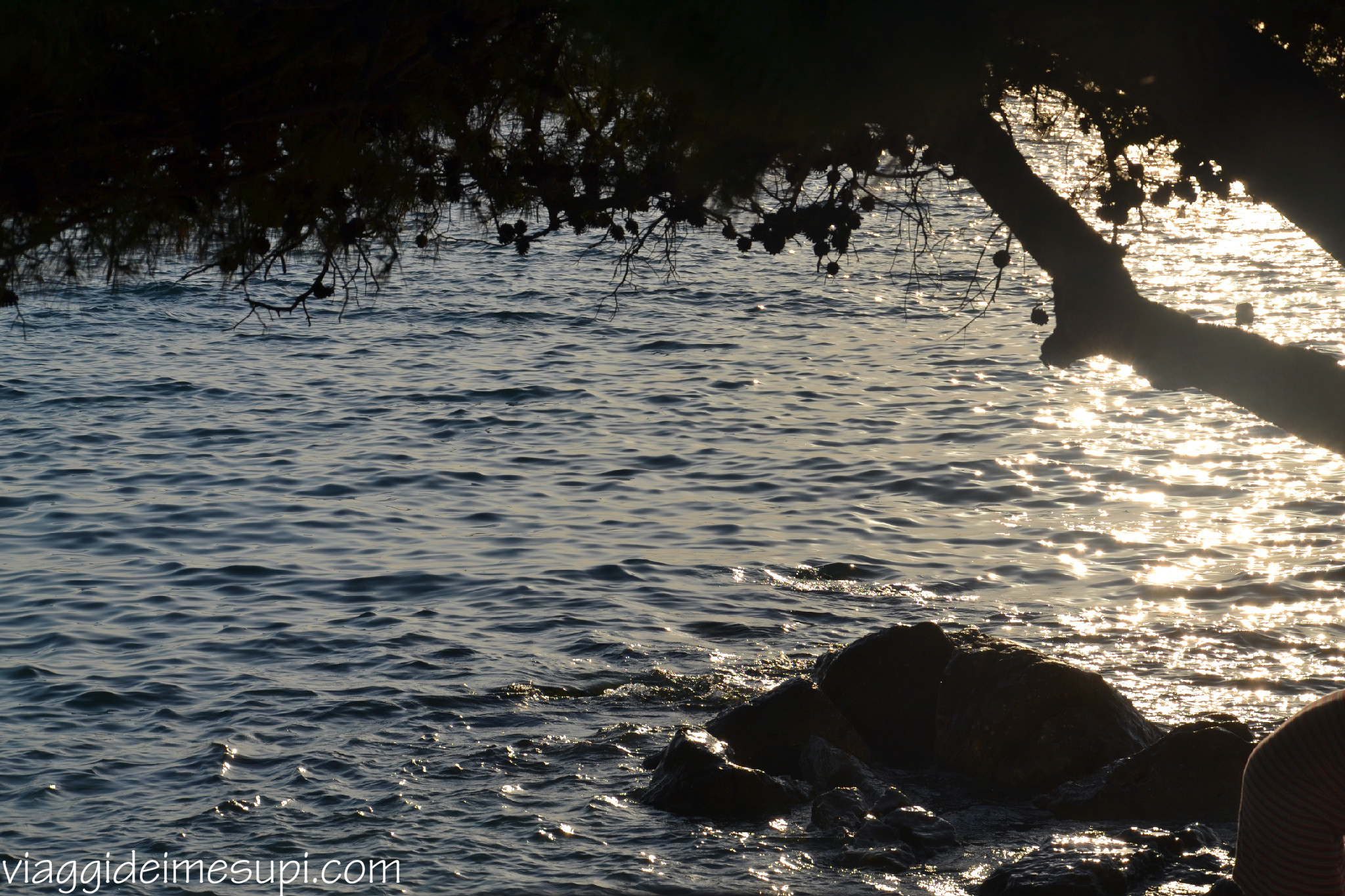 I will not illude you saying that it is the most beautiful place in Montenegro, no.
Or rather, it is if you are looking for relax, tranquility and peace. It’s not like Kotor, or Budva, area full of clubs, nightlife and tourists. It ‘s the ideal sea-place to sleep, bath in clear water, stroll on the boardwalk at evening while having an ice cream and browsing through the stalls. Enjoying days without haste, without kilometers to go, living slowly, relaxing your mind and body.

It ‘s the biggest port in Montenegro (and the only one where you can get from Italy), but tourists usually use it only as a passageway to get to the Bay of Kotor (which to be honest I’m kicking myself cause I wasn’t able to see).
Indeed Bar itself has not much to see. There’s Stari Bar, the ruins of the ancient Antibarum, called the Pompeii of Montenegro; King Nikola’s Castle, his summer residence; the Monastery of Our Lady of Ratac. And to visit these last two things you have to leave the city.
The city is made alive thanks to the port facilities and the cultivation of olive trees, which have become so important to the city that there is even a legend which states that every citizen who decides to leave the city, must first plant ten olive trees. In the region is also present the olive tree of Mirovica, the oldest in the world.
Now that was the “guide” part. Let me tell you “our” Bar.

Apartmani Dea
Absolutely the cheapest accommodation we could find: 60 Euros for two people and three nights… in August!
They are apartments with all the essentials: bed, kitchenette (with fridge and sink, no stove), bathroom, tv, closet and balcony. The owner is amenable and especially one of the few who can speak and understand English. I’ll tell you the truth, as soon as we arrived the place wasn’t all that good. No one could tell us where the apartments were, the address we had did not seem to exist, some pointed one way, some the opposite one. At the end were able to contact the owner (also keep in mind that calling from Montenegro costs a lot. It’s considered, telephone rates speaking, outside Europe), who told us that he would come to pick us up with the car. I, honestly, had a moment of panic. We were in a country where no one seemed able to understand us, looking for a place which probably did not even exist (I was convinced of that by then), where someone we never met in our lives was going to take us in his car. I wanted to escape.
It would have been a really stupid thing.
When I managed to calm down (have mercy, I spent a sleepless night on the ferry, and the day before I woke up at 7am. I was awake from 27 hours), we met the owner and eventually managed to get to the apartments. At first glance it was a disappointment: they are in a site still under construction, in unfinished buildings and in the middle of nowhere. 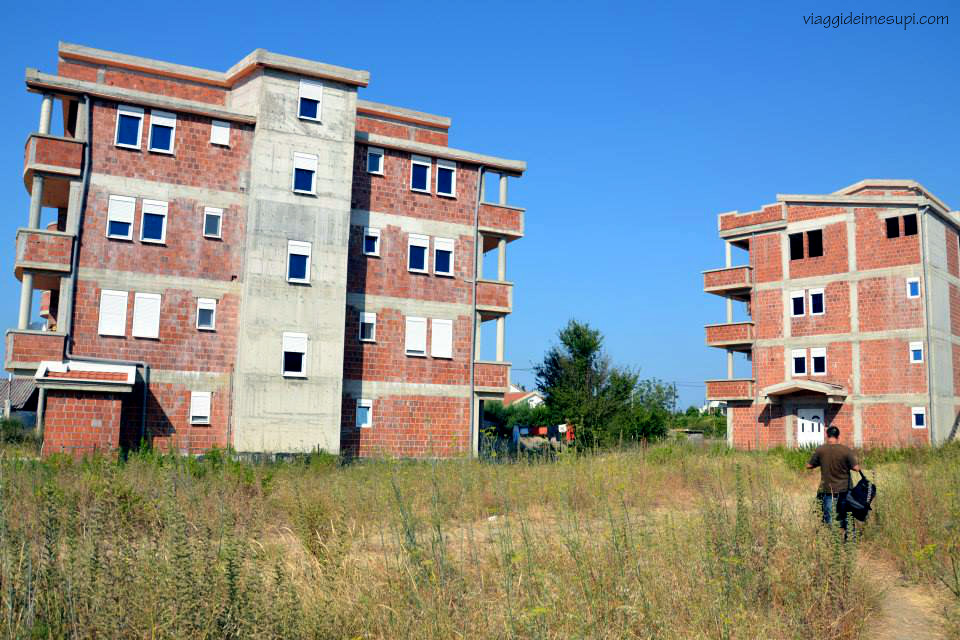 We did not gave in though. And we did good.
The only negative point about these apartments was the location: 20/30 minutes walking from the sea and ten from a train station (where, however, not all trains stop… and let me remind you that Montenegro has still a single railway line). It’s an area under construction and the road that leads to the sea – and the only one that leads to the apartments – I would not walk at dark.
On the other hand, there are advantages: the economy, which is not trivial, the comfort of the apartment, and especially the availability and warmness of the owner.
You know, I’m more interested in humanity and honesty than comfort.
The owner, in addition to offering us rides in the car everytime we wanted to go to the city center, one night came knocking at our door with two Montenegro magnets as a gift. A small thing, but to me it had never happened before. One warm attention which gave birth to a warm smile.
And that’s not everything: for personal reasons we had to leave one day earlier and, guess what? Even if we told him the same day, he refunded us the money of the last night.

Ah , the apartments don’t have air conditioning, but , believe me, it’s not needed. We were terrified when we saw that it was missing, as the weather was hot as hell, but we were told not to worry, since it would not be needed… and it was true . The night was fine, also with windows closed. One thing that amazed me was this: 38 celsius degrees (100° F) during the day and 24 (75°) at night. 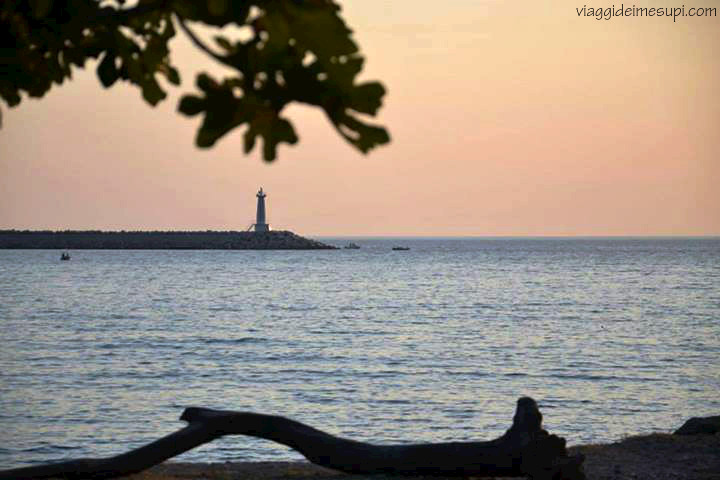 Where to eat
Other fundamental point: what do you eat in Montenegro?
Lake fish, especially, mountain meat more than anything else, and most importantly, pasta, pizza, ice cream and coffee.
No, it’s not a joke, the influence of the Italian kingdom is still present. I must admit reluctantly, they do know how to make Italian specialties.
A neutral advice: you might want to eat out for lunch and dinner rather than go shopping. The prices are so low, you would spend almost the same amount, with the difference of being served hand and foot at the restaurant and not having to wash the dishes.

In Bar ice cream in stalls on the waterfront is very good, everywhere you go.
If you want a romantic place, with a beautiful view, and a tropical flavor, go to Martina’s : terrace on the beach, thatched umbrellas , comfortable sofas , a warm and romantic landscape, low prices and excellent ice cream. A banana split , for example? € 2.50. 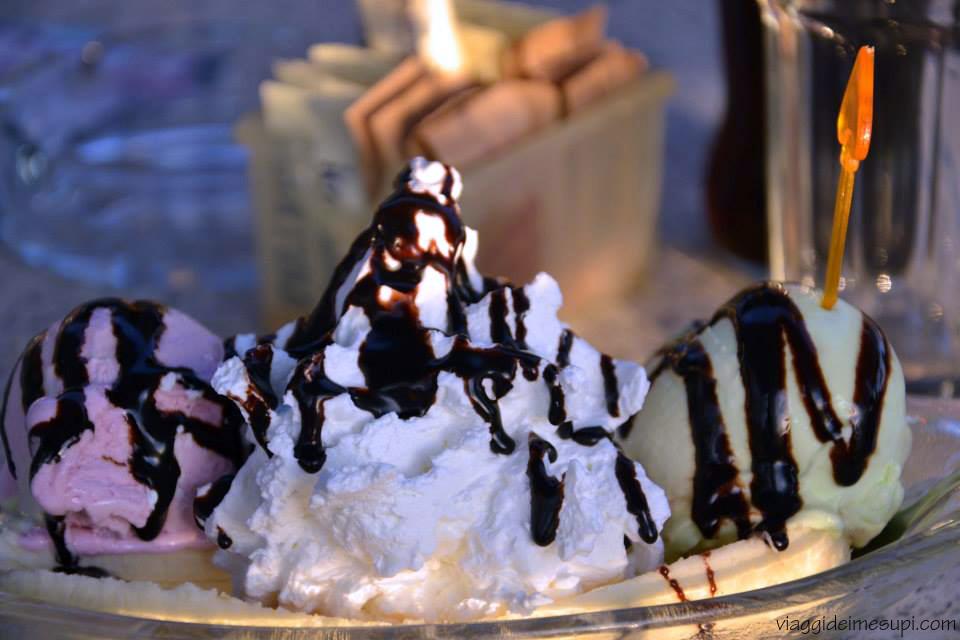 For fish, go to Gurman’s. It is not by the sea, but they do an excellent fish soup, typical of Bar, and don’t miss the Punjene lignje Nacim, very tasty stuffed calamari. It has the classic style of the restaurants by the sea: simple , white, old photo of the harbour on the walls inside, glass walls overlooking the street. In two, eating an appetizer, two main courses, one second (all of fish), and a dessert, we spent 18 Euros.

Another restaurant, also recommended by a Lonely Planet guide, is the Ciao – Restaurant Pizzeria. Here you can eat typical Italian dishes, from amatriciana to pizza, bruschettas, to cutlets.
We tried it (it is considered the best restaurant in Bar) and it is not bad at all. Sure, it’s not like eating the same things in Italy, of course, but if you consider that they consider them their flagship dishes, it is worth trying. Do not expect good things like the restaurant downstairs, and you won’t be disappointed.

Life in Bar
What to do in Bar?
Rest. Relax . Not thinking. Enjoying the sea and the sun.
The crystal clear waters of the Adriatic, the stony beaches, the hot sun: these are the major attraction of the place. Bar has over 44 kms of sandy or rocky beaches, and also the closest to the harbor was magnificent. It’s made of stones, so it is not comfortable to walk without special shoes. The water is warm and clear, and you can choose without any problems if you prefer to lie down on the stones with your towel or, for the price of 2€ per day, take two chairs and a beach umbrella.

But there is one thing that more than any other is worth at least one night in Bar: the sunset.
There’s the most beautiful sunset I’ve ever seen. When you ‘re in front of it, you just stop. You stare, hold your breath, and you can do nothing else but to stand still watching, to let it embrace yourself in the warmth of its colors and a spectacle that leaves you breathless. It gets inside from your eyes and stops your heart.
I don’t know if on the other side of the world there are sunsets better than this one. I just know that it is the best sunset I can remember, the most beautiful colored sunset you can imagine, a sunset that enchants your sight and soul. It leaves you breathless.
I, more than anything else, would say without reason. You know that feeling of stun you have when meeting a beautiful woman (or handsome man)? When thoughts just vanish and you slightly open your mouth?
That one.