Travels, sea, rock and Harley Davidson: probably this english rally has all the things I love the most.

Truth being said, to me there is nothing more to add: I already said all that matters, the four reasons why I would book air tickets to Brighton right away, because the second week of october, in which the event is scheduled every year, is almost here. But I’ll be fussy and  tell you everything about this charity riders.

When we went there for the first (and sadly the only) time, we took the bus from London. I don’t know if you have in mind english highways, or at least the ones that link London to Brighton: wide, clean, surrounded with emerald green farms and, luckily that day, enlightened by a mild sun. To this landscape add dozens of Hds darting on your sides, passing your bus and placing in front of it. Apart from being consumed with envy by the question: “Why am I stuck in this bus when I could be on one of those?”  It’s an amazing spectacle. Watching those bikes on those streets gives you a deep feeling of Freedom, the real essence of travelling: just you, your bike, and the road…

The only thing I regret of that day is that we couldn’t really visit Brighton. We got eyes only for HD. Time was not enough, the rally huge…  But I hope I will make up with this city one day.

How can I describe the Brightona charity riders?
Kilometers of custom bikes on the sides of the street, left and rightside, on the boardwalk. KILOMETERS. Not only Harleys, there were also Royal Enfield, Moto Guzzi, Triumph, and a Kawasaki Ninja wich was probably there by mistake. 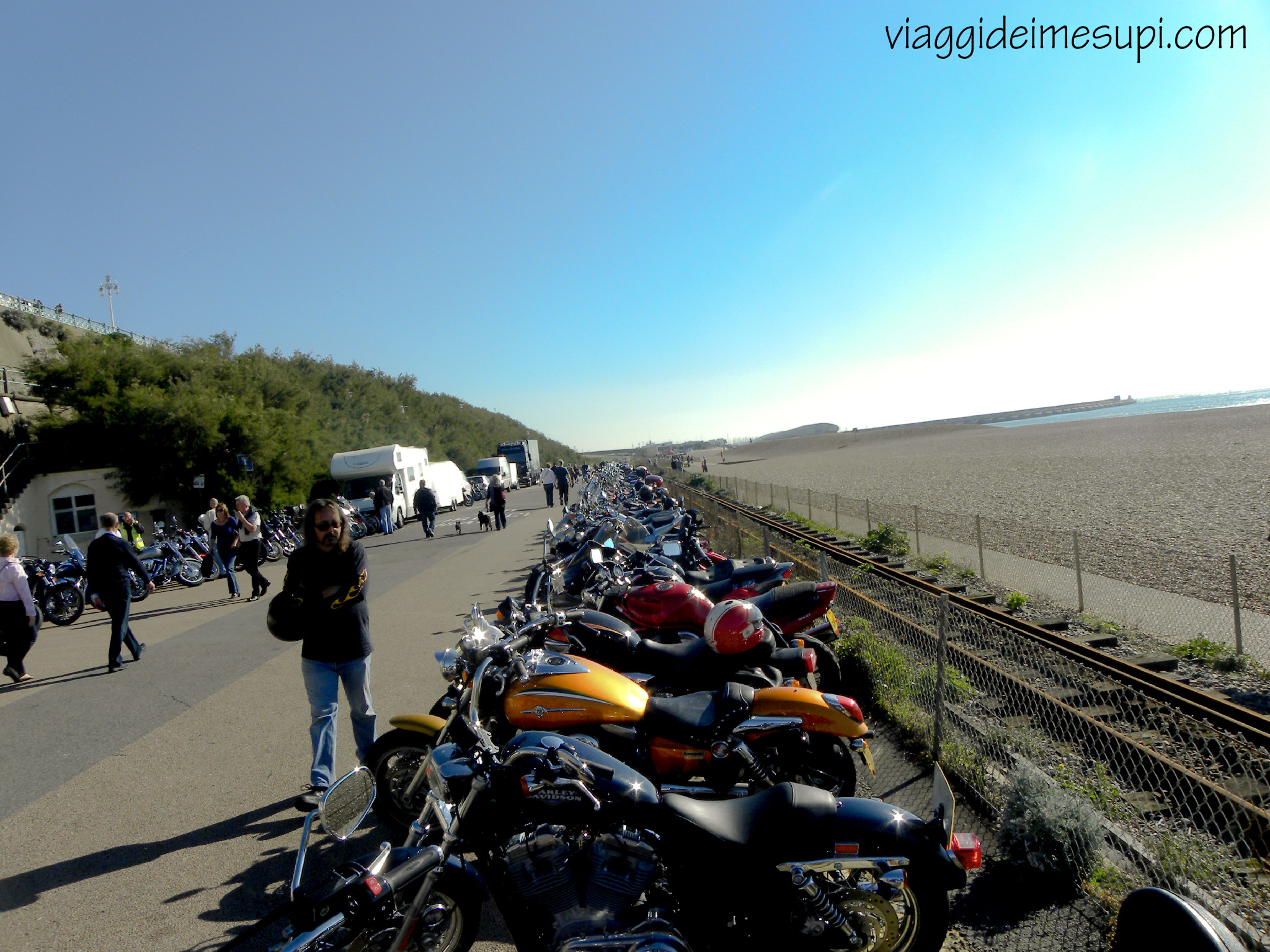 Not only bikes, though. Also classic muscle cars (with american plates… They even come from the States for this rally) such as ’67 Pontiac GTO, ’67 Stingray, ’57 Chevy Bel Air and even an old hot rod straight from the ’30s.

Also open shops of all kinds, (all bikers related) with cheap prices: we bought a pair of biker’s leather gloves for just 5 pounds (8 $, 6€)!
A little advice? If you want to save some money, wait as long as you can before buying… the closer to closing time, the lower the prices! There also were a custom bike contest/show, the Wall of Death, live music… How amazing was walking that street with a band playing Sweet home Alabama, Call me The Breeze, or Free Bird! I felt I was in the U.S.!
Do you know what is the most beautiful thing of it all, except for the bikes? The Biker Spirit. Do you know what I mean? That friendship and sense of brotherhood you feel with strangers, when eating and drinking at the same table with persons you never met before, but still you’re all singing together, when greeting each other as Brothers, when joking and laughting as long time friends, when hugging, when telling stories like friends meeting once again after long years.
The point is that I could tell you about Brightona, or any other Harley rally, in a thousand details, but no words can ever explain how it feels like to BE there, the emotions felt. One can only live it.

Like the saying about HDs: “If I had to explain, you wouldn’t understand.”