Alberobello: Bizarre and unusual destinations around the world 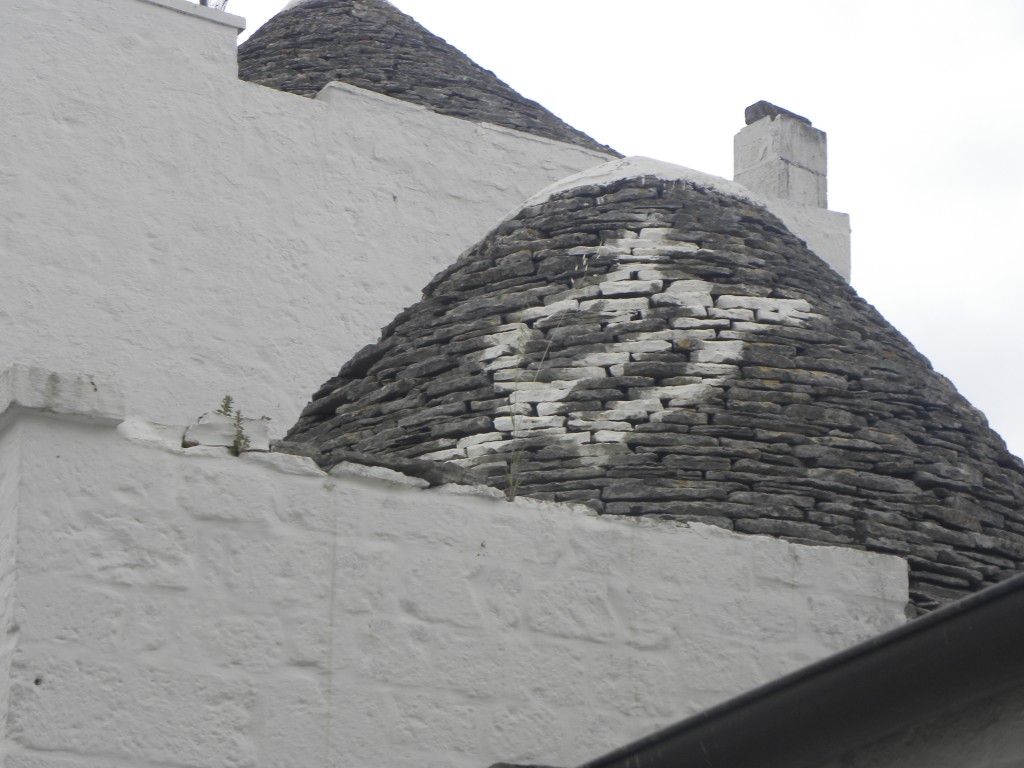 When I found out on the Los Angeles Times, in the Travel section, the Bizarre and unusual destinations around the world, I couldn’t help adding it to our list, just after checking all the places we had already seen. One of this, was Alberobello itself, whose “Trullos” are also UNESCO Cultural Heritage of humanity. 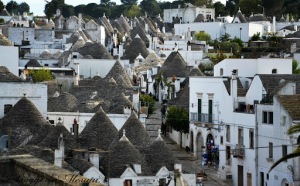 It is useless to describe the uniqueness of this place, that we all know, at least through images. Much uniform yet so different, because every “Trullo” has its own characteristics , unique in its originality. At a first fast glance, the old part of Alberobello, may seem like a cluster of typical buildings next to each other: proceeding through this area, though, we can find a set of paths and stairways built in a specific order, accompanied by the Trullos’ whiteness.

Alberobello is situated on two hills: to the east is the most modern area, while to the west is the oldest, the Trullos conglomerate. This area is divided into Aia Piccola and Monti districts. In the second one, characterized by the steps, there are all the Trullos which now became workshops, souvenir shops, cafes.

In the most modern part, there is a Trullo that has become a restaurant, which we tried, and we recommend: “Il Trullo d’oro”. It is not exactly cheap, but the food, all from the tradition, are made using high-level ingredients and are all freshly cooked. 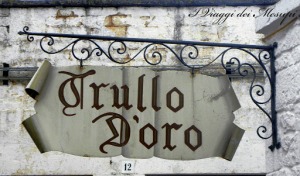 Trying to make a list of things not to be missed in Alberobello, is not easy, everything is so unique that the only thing really worth to do is walking and getting lost in those white streets, where each fragment deserves to be admired, and cannot but remain imprinted in the eyes.
Alberobello is a place you won’t forget.
It isn’t majestic, rich, it has no pretensions: the most beautiful thing about this town is its disarming simplicity that manages to live despite its being so special, so unique.One thing that makes Trullos even more unique, are the white symbols painted with lime on their roofs. 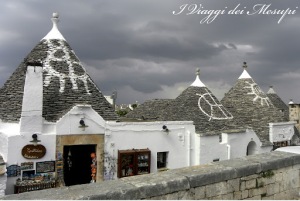 There are several theories about their meaning, but the most reliable states that initially the roofs were painted as good charm, against any evil eye. Then they became related to religious faith: a statement about the religion (Jewish – Christian – pagan) of the inhabitants and as a result, at the time, it was easy to recognize the family who was living there.

There are three things in particular, in our opinion, which is worth mentioning:
– The Sovereign Trullo: A few steps from the pedestrian area, the only two-storey Trullo that is located in Alberobello.
– Siamese Trullos: They are located in the Monti district, the particular form of a double cone on the top is the only case in Alberobello. Now they are two separate Trullos, but they were once communicating by a door, and faced on two different streets with two separate entrances. It seems that this particular form is linked to a legend: the Trullos were two brothers who lived together. The two fell in love with the same girl, which, even if promised to the older, married the younger instead. The older brother drove away from home the two lovers, but the younger claimed his part of the Trullo: the Trullo was thus divided and the entrances were separated on two different roads so that the older brother had no more to do with the two lovers.
– Saints Cosma and Damiano’s Basilica: the two longest-venerated Saints in Alberobello, which are also the patrons. The Basilica is in the neoclassical style, a huge blue and yellow point which stands out in the middle of Trullos’ whiteness.

A place that never stops to amaze! 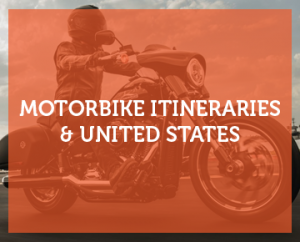 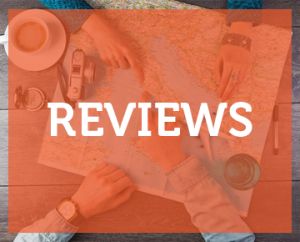