The Purity Order: why german beer is different from other

One of the things that makes Germany famous is its beer.
This year I’ve been to Germany a couple of times, and when I go to a place, I feel a great desire to know everything about it,  above all about traditions and curiosities. Thanks to this research, we discover so many interesting, funny, curious things that enhance our love for the world and our will to explore it.

About Germany, the thing that impressed me the most, among the various peculiarities associated with its beer, is the fact that the famous taste of the beer was made thanks to an edict that, paradoxically, limited its production and the method to produce it. 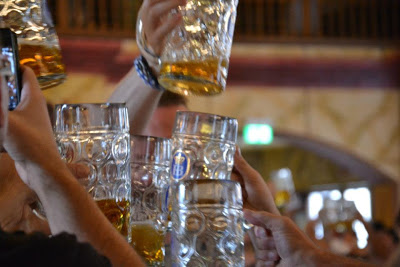 he Bavarian Reinheitsgebot (Purity Order, sometimes called the German Beer Purity Law), was subscribed on 23rd April 1516, by William IV and Louis X, duches of Bavaria, and forced brewers to use only water, barley and hops.

“We hereby proclaim and decree, by Authority of our Province, that henceforth in the Duchy of Bavaria, in the country as well as in the cities and marketplaces, the following rules apply to the sale of beer: From Michaelmas to Georgi, the price for one Mass [Bavarian Liter 1,069] or one Kopf [bowl-shaped container for fluids, not quite one Mass], is not to exceed one Pfennig Munich value, and From Georgi to Michaelmas, the Mass shall not be sold for more than two Pfennig of the same value, the Kopf not more than three Heller [Heller usually one-half Pfennig]. If this not be adhered to, the punishment stated below shall be administered. Should any person brew, or otherwise have, other beer than March beer, it is not to be sold any higher than one Pfennig per Mass. Furthermore, we wish to emphasize that in future in all cities, markets and in the country, the only ingredients used for the brewing of beer must be Barley, Hops and Water. Whosoever knowingly disregards or transgresses upon this ordinance, shall be punished by the Court authorities’ confiscating such barrels of beer, without fail. Should, however, an innkeeper in the country, city or markets buy two or three pails of beer (containing 60 Mass) and sell it again to the common peasantry, he alone shall be permitted to charge one Heller more for the Mass of the Kopf, than mentioned above. Furthermore, should there arise a scarcity and subsequent price increase of the barley (also considering that the times of harvest differ, due to location), WE, the Bavarian Duchy, shall have the right to order curtailments for the good of all concerned.”

Why this order was issued? Actually it was a temporary order, issued for the year 1516 only, ‘cause that year’s wheat harvest was catastrophic. Eventually, the purity law prevailed in Germany for 476 years, until 1992, years of Europe economic and trade union, when Europe obliged Germany to comply with EU laws, which imposed the import of any kind of beer.

Germans, out of habits or taste, still prefer the beer brewed according to the Reinheitsgebot, for this reason. today instead of the Reinheitsgebot, there is the “Provisional German beer Law“, which allows the use of some ingredients prohibited by the old edict, such as malt, wheat and sugar cane, but doesn’t allow the use of unmalted barley.
Considering that also the rest of Europe appreciate the taste of this ancient way to brew beer, would it be appropriate to re-evaluate the more genuine methods to produce what we eat and drink?

What to see in Munich, the “most northern city of Italy”

Oktoberfest in Munich: what to expect from the most important beer festival